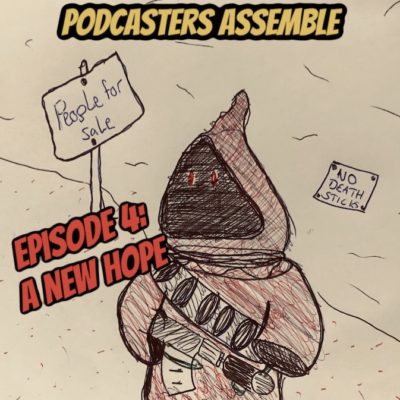 “I find your lack of faith disturbing”

With only 35 days until The Rise of Skywalker, podcasters from across the galaxy assemble for the ambitious task of reliving the thrills of all 8 films in the Star Wars Skywalker Saga.

If you would like to be featured on an upcoming episode head over to: https://probablywork.com/podcasters-assemble/

You can also join the discussion in our new Discord server.  Sure to be lots of toilet humor this episode.

Featured in This Episode:

A huge thank you to everyone who contributed to our Star Wars: Episode IV – A New Hope.  Be sure to check them out at the links below:

This podcast is a production of the We Can Make This Work (Probably) Network. Follow us below to keep up with this show and discover our many other podcasts!

The place for those with questionable taste!

And support us on Patreon to unlock tons of great bonus content!

The podcast network.
View all posts by probablywork →